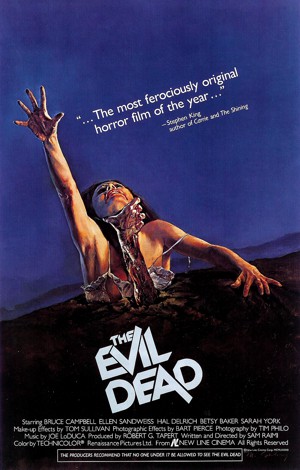 Although it spawned both a beloved horror series as well as an acclaimed television series, I can’t help but feel that “The Evil Dead” is underrated. Likely it’s because of the one-two punch of the crowd pleasing sequels, but Sam Raimi’s directorial debut is often dismissed by series fans in favor of its more comedic continuations. In my opinion however, this is the strongest entry in the series. It’s strikingly atmospheric and ominous from the very first shot and it never lets up: There’s the remote setting, the oppressive atmosphere, the downright unsettling use of sound, and impressive practical effects. Buoyed by Raimi’s gonzo, go-for-broke directorial style, the movie also manages to both establish and maintain a palpable senses of dread, and the final result is one of the best examples of grindhouse cinema.