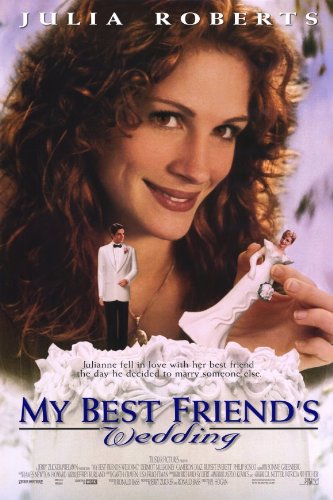 Director P.J. Hogan’s follow-up to his breakthrough “Muriel’s Wedding,” “My Best Friend’s Wedding” has all the makings of a crowd-pleaser, but is held back from greatness thanks to its coterie of unlikable characters, beginning with Julia Roberts: She plays her character with all the charm expected of her, but it’s hard to get behind her as lead protagonist, given that she’s so conniving and untrustworthy. Additionally, Dermot Mulroney’s character (the “best friend” of the title) is also a cad, prone to temper tantrums and outbursts at the slightest hint of dissent from anyone, and also chasing a flirtation with his best friend in the days leading up to his wedding. It’s all the more frustrating because Hogan’s direction is pitch perfect for a romantic comedy: The movie flows well, the dynamics are well established among the characters, the supporting characters are well-defined and perfectly cast (in particular Cameron Diaz and Rupert Everett), and the use of music is absolutely lovely (in particular the famous lunch scene, which features an impromptu rendition of Dionne Warwick’s “Say a Little Prayer”). It’s just a shame that the main characters are such jerks, or else this could have been a modern classic – as it is, it’s a good time with some frustrating structural mistakes.